Hilda: A Netflix Original Series Wiki
Register
Don't have an account?
Sign In
Advertisement
in: A to Z, Groups, Y,
and 5 more

Yule Lads are a group of mischievous thieves who work for Gryla. They appear in the Season 2 episode "Chapter 10: The Yule Lads".

The Yule Lads are humanoid creatures about the size of a human child. Most of them have beards, and they all wear colorful costumes.

They are very agile and acrobatic, and have the power to instantly put someone to sleep.

The Yule Lads were once human children that where taken captive by the ogress Gryla for being naughty. To escape getting eaten by her, they volunteered to work for her instead and find more naughty children. It started with Kertasnikir. For a while, each new child they brought made the same deal with Gryla, until there were 21 Yule Lads. Then Gryla caught on to the scheme and ate lads 14 to 21. The remaining 13 have since been working for her. Every year around the Trolberg Winter Festival they come to Trolberg to hunt for naughty children. When they find them, they abduct these children from their homes and leave them in sacks underneath the Sonstansil Tree for Gryla to find.

They work in 2 shifts of 7 Yule Lads, with Kertasnikir working on both shifts since he is the leader. They reside in a wooden house that can show up out of nowhere and disappear just as quickly.

In "Chapter 10: The Yule Lads", Hilda learns about their scheme after they abduct Trevor, Trevor's mom and even Johanna to be sacrificed to Gryla. When she realizes they are basically trapped in this unwanted job by their fear of Gryla, Hilda convinces them to give Gryla the Sparrow Scouts broth as a substitute for humans. Gryla accepts the broth, and the Yule Lads thus no longer have to find her children.

In the animated series, only four of the 13 Yule Lads are mentioned by name:

The novel "Hilda and the Time Worm" gives the names of all 13, and the meaning of their names:

Gryla and the Yule Lads as seen in a book

The Yule Lads in the novelization 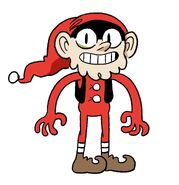