Hilda: A Netflix Original Series Wiki
Register
Don't have an account?
Sign In
Advertisement
in: A to Z, Groups, W, Creatures
English

Animated series:
"Chapter 1: The Hidden People"
A woff is a round, furry creature resembling wolf pups. They are usually seen in the series flying above in huge packs. Their flying patterns are not exactly predictable.

They appear in the graphic novels, the animated series, and the novelization.

Woffs are seen as round, furry, canine creatures. They have big, round eyes, small black noses, and long, fox-like tails. They also have a pinkish muzzle on their faces, and small oval ears. Some have darker fur as seen in Hilda Creatures, and white Woff also exist.

They seem to lack any feet or paws, unless these are hidden under their fur. This suggests they spend the majority of their life airborne and rarely ever land. They do sleep on the ground however.

It is unknown how Woff obtain flight, but it is clearly their only way of getting around. Woff spend the mayority of their lives airborn and rarely interact with the world below.[1]

Woffs are often seen flying around in the clouds. They are seen as herds, possibly being a social species. They can get aggressive when something is on their backs, shaking and flying around vigorously to get the object off.

Woffs migrate frequently, up to two times a week[1], as being seen by Hilda's mother in "Hilda and the Midnight Giant". It is unknown where and when they fly, as well as how long they stay until return. Sometimes, they travel the entire length of the wilderness.[1] They travel in complex patterns. The Sparrow Scouts have been keeping track of the Woffs since the days that Johanna was a Sparrow Scout, and yet so far no Woffologist has been able to map out their migration patterns. It is thus considered one of the worlds greatest mysteries. The Keeper of the Bell made great process with it however, mostly because he wanted to know where to safely put his laundry line without any woff getting caught in it.[2]

Woffs were shown to react to loud bells in a similar way trolls do: They became disoriented and some even crashed to the ground, where Sparrow Scouts had to help them back up.[2] 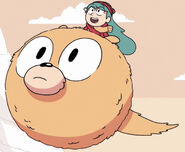 Woff as seen in the Hilda Creatures app

Woff getting eaten by a Troll (right) 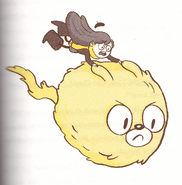 A woff seen in Hilda and the Nowhere Space 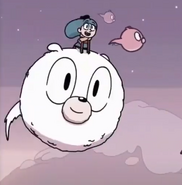 White woff as seen in the season 2 opening sequence