Hilda: A Netflix Original Series Wiki
Register
Don't have an account?
Sign In
Advertisement
in: W, Locations, A to Z

Witches Tower is the headquarters of the Witches living in Trolberg. The building as seen in the TV series does not appear in the graphic novels.

The tower is build upside down into the ground, rather than from the ground up like a regular tower, and is hidden underneath the Library. It can be accessed through a series of secret rooms and passages.

Witches Tower contains several rooms, including a hallway with a portrait gallery of past witches and their familiars. At the very top (or technically bottom), The Committee of Three governs the tower from a circular room whose walls are covered with book shelves. From this room, there is a portal to the Void of No Return.

The chamber of the Committee of Three 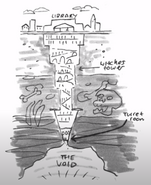 Kaisa and her friends enter the Committee chambers 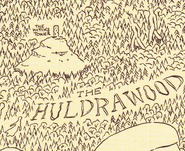 Witches Tower depicted on a map, in the Huldrawood
Community content is available under CC-BY-SA unless otherwise noted.
Advertisement