Hilda: A Netflix Original Series Wiki
Register
Don't have an account?
Sign In
Advertisement
in: A to Z, Groups, W, Witches

The Committee of Three

"Chapter 3: The Witch"
Witches are humans that have learned the ability to use magic. They are unique to the animated series and do not appear in the Graphic Novels.

Since Kaisa, the Librarian, is a witch, they have technically been appearing in the show since season 1, but are not officially identified until Season 2.

In the world of Hilda, magic is a skill that, like many skills, can be learned by anyone through study and training. But while all people can thus use magic (like how Hilda summoned the Tide Mice in "Chapter 8: The Tide Mice"), Witches take it to a whole new level by devoting their lives to studying and understanding magic. It takes many years of practice to officially become a witch.

The witches living in Trolberg have a secret headquarters underneath the Library named Witches Tower. They are governed by The Committee of Three.

Witches have unfairly gained a reputation of being evil, or at least frightening.[1]

Many Witches have a familiar; a living being they have a strong connection with. Most familiars are animals or supernatural creatures; historically, cats, owls and toads where most common as familiars, but some witches also had a Nisse or Forest Giant as familiar.[1] At the end of ""Chapter 3: The Witch", when Matilda Pilqvist takes Frida as her new student, she states that Hilda would make a good familiar, proving that humans can be familiars as well.

The habbit of having a familiar has however gradually fallen out of use over time.[1] 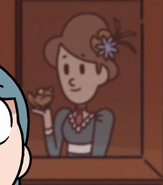