Hilda: A Netflix Original Series Wiki
Register
Don't have an account?
Sign In
Advertisement
in: A to Z, Groups, W,
and 5 more

Graphic novels:
Hildafolk
Animated series:
"Chapter 1: The Hidden People"
Water spirits are creatures that resemble amorphous, watery globules. Water spirits can sometimes be seen poking above the waves, but they prefer to spend most of their time deep below the surface. They appear in the graphic novels, animated series, and Hilda Tie-In Series.

Water Spirits have a body that is entirely composed of water or a water-like substance. Aside from their glowing eyes, eyebrows, and sometimes a mouth, they have no other features. They can however shape-shift their body into various forms.

Despite being made of water, they can make their body dense enough for other creatures to ride on without falling through. They can also shape their bodies into a bubble that others can ride inside when going under water.

In the Tie-In Novels, Water Spirits are able to speak the human tongue, as seen in "Hilda and the Hidden People", and "Hilda and the Great Parade" and "Hilda and the Ghost Ship". In the graphic novels and animated series, they are never heard talking, but in "The Beast of Cauldron Island" it is revealed they have their own language, which Wood Man also speaks.

According to "Hilda's Book of Beasts and Spirits", Water Spirits come in two sub-categories: sea spirits, and river spirits. The only real difference between the two however is their size; the sea-spirits are larger.

Water spirits are gentle creatures, considered to be among the most friendly of magical beings.[1] They spend most of their time gliding through the deepest depths, but sometimes poke their heads above the water. They are naturally curious.

They can be summoned by blowing on a conch shell (the novelization reveals that this mimicks the call of a female water spirit), and can be persuaded to give humans or animals a ride across water. Alfur, Hilda and Frida do so in "The Lost Clan" to reach the island of the Lindworm, and again in "The Beast of Cauldron Island".

There are stories of water spirits luring sailors to their deaths with otherwordly music, but there is no evidence of these tales being true. Most likely, the sailors where attracted by the spirits choir practice, and unwisely accepted an invitation from the spirits to have dinner in their underwater homes.[1]

A water spirit has a cameo in "Hildafolk". Here, Hilda calls the creature a Sea Spirit, and assumes he must be lost since he is swimming in a fjort. Another water spirit is briefly seen in "Hilda and the Stone Forest", during a compilation of Hilda's various adventures.

In "The Hidden People" and "The Lost Clan", two members of the species are seen. Their names (if they have them) are unknown. The Water Spirit from "The Lost Clan" also appears in "Hilda and the Great Parade".

In Season 2, several water spirits are seen as cameos, and one plays a large role in "The Beast of Cauldron Island", where it helps Hilda and Frida investigate the waters around Cauldron Island.

In the tie-in novel "Hilda and the Hidden People", Hilda encounters two Water Spirits in the Caves of Kismet. The spirits guard two of the caves as part of the final test that anyone who wishes to visit the Elf Prime Minister must pass; one cave is where the Prime Minister lives, the other supposedly contains a flesh eating troll. Hilda can ask the water spirits one question only to find out which is the right cave, with the added twist that one spirit will answer truthfully while the other will lie. Hilda's solution is to ask the spirits what the other spirit would say if she asks him if the prime minister lives in the cave she is about to choose. They answer "no", which for Hilda is enough a sign that she picked the right cave. In "Hilda and the Great Parade", she meets another water spirit in a scene adapted from "The Lost Clan". In "Hilda and the Ghost Ship", a Water Spirit gives Hilda, Frida and Wood Man bubble helmets so they can go under water to look for Wood Man's lost body.

A Water Spirit seen in the Season 1 opening sequence 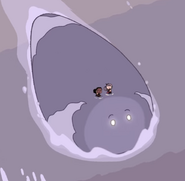 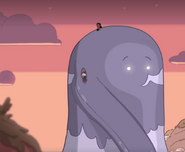 A water spirit in "Hilda and the Stone Forest"

The Water Spirits seen in the Caves of Kismet

Hilda and Frida riding a water spirit, "Hilda and the Great Parade".

Hilda and Frida riding inside a water spirit.

Water Spirit in "Hilda and the Ghost Ship"
Community content is available under CC-BY-SA unless otherwise noted.
Advertisement