Void of No Return

The Void of No Return is a location and creature residing underneath Witches Tower. It is first seen in "Chapter 3: The Witch". The creature does not appear in the Graphic Novels. It's purpose is to execute Witches or People that have broke the Committee's rules or orders such as messing with spells or pity reason like getting late.

The Void of No Return looks like an endless, black void with no bottom. It can form large, black, hands and tentacles with eyes and mouths in order to grab and devour victims.

The void is located just underneath Witch Tower, and the gate to the void can be opened magically by Lloyd's guitar or a spell.

The void has to be fed new victims reguarly, or it will go out of control. At the end of "Chapter 3: The Witch", Hilda, Frida and Kaisa where able to subdue the void by luring a Plant Creature into it, which fought and eventually entangled the void's many tentacles. 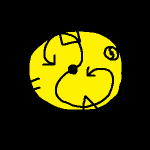