Hilda: A Netflix Original Series Wiki
Register
Don't have an account?
Sign In
Advertisement
in: Creatures, A to Z, V

Vittra are humanoid creatures, with features that resemble plants from the Allium genus (onions, shallot, leek, chives). On average, a Vittra is about 1.5 foot ( ~0.45m ) tall.[1] They are bipedal and have two arms with hands.

They are very durable; getting a stake hammered through their head, and pulled out again, doesn't seem to harm them in the least, or even hurt them.

The ones seen in the graphic novels, animated series and novelization all more or less the same. "Hilda's Book of Beasts and Spirits" however reveals they come in a greater variety of forms.

They live deep underground in a complex network of tunnels, which they constantly expand. Each Vittra family has it's own dwelling within these tunnels. They keep ground cows as cattle, and drink juice from roots. Their species are familiar with art, as proven by a Vittra making a painting of a cow. The Vittra hold an annual cattle driving competition.

Once a year, they come up to the surface to hibernate and catch sunlight with the flowers on their heads. During this hibernation, they are practically impossible to wake up. In "The Sparrow Scouts", Hilda, Frida and David tried to earn their Friend of the Park badge by cleaning up a section of Trolberg park. They first removed the weeds, not knowing these were actually sleeping Vittra. When they realized their mistake, they were forced to rescue the vittra from getting grinded up into mulch. They returned them to their place in the ground without any of the Vittra waking up and realizing what had almost happened to them.

The graphic novel and novelization don't reveal anything about the Vittra's personality.

In the animated series, the only Vittra that Hilda and her friends are ever seen interacting with is verbally abusive and rude, constantly berating the three kids for what they've done, blowing raspberries, and acting unpleasant. It's unknown if only this particular Vittra is like that, or if this is in general how Vittra act. In "The Draugen", multiple Vittra are seen reacting aggressively towards the construction workers that were ordered to close up their tunnels.

According to "Hilda's Book of Beasts and Spirits", Vittra are peaceful unless their homes are invaded or if they are disturbed during their hibernation, in which case they can become bad-tempered, which may explain the rude behavior of the Vittra Hilda and her friends came across to some degree. 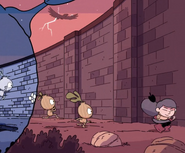 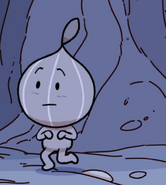 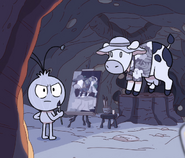 Cameo in "Hilda and the Black Hound"

Cameo in "Hilda and the Stone Forest".

In "Hilda and the Nowhere Space". 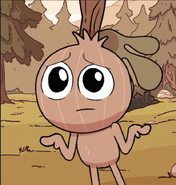