Hilda: A Netflix Original Series Wiki
Register
Don't have an account?
Sign In
Advertisement
in: A to Z, Characters, V,
and 4 more

"Chapter 5: The Windmill" (series)
"Hilda and the Ghost Ship" (books)

This Unnamed Nisse was created by Victoria Van Gale. He appears in the episode "Chapter 5: The Windmill", as well as this episode's adaptation "Hilda and the Ghost Ship".

In many ways, this nisse resembles Tontu; a fact also acknowledged by Hilda. He has a head full of moss, that leaves only his nose (which appears to be a beet) visible. His body however is not flesh and blood, but made from several materials, like a wooden torso. Underneath his face, he has a skull.

He can crawl on walls and, according to the tie-in novel, is quite strong for his size.

The nisse was made to serve Victoria van Gale. He never talks, and does everything she tells him to. He can be quite sneaky and creep people out.

After the destruction of her Weather Station, Victoria van Gale moved into the old windmill outside Trolberg, and got the idea to find a way for people to reach Nowhere Space so they could use it for more homes. Since only Nisse could enter Nowhere Space (and because she could use an assistant), she artificially created one out of various materials, and used dangerous, old magic to bring him to life so he would have the powers of an actual Nisse.

When Frida, Hilda and David found Victoria at the windmill, David in particular quickly developped an enmity with the Nisse. When Hilda tolt Tontu about the Nisse, he too was unnerved to hear that Victoria made a Nisse from scratch. While the Nisse proved himself helpful, he also spied on Hilda for Victoria, and when David discoverd some secret documents and took them home, the Nisse followed him there to steal them back.

When Victoria puts her plan in motion, she uses the Nisse to power up a machine that can open a breach to Nowhere Space. David, Frida and Hilda interfered. David fought the Nisse one more time, and in the fight managed to pull it's face off, revealing the skull underneath. Frida then kicked the Nisse into the breach. The final shot of the episode showed Victoria stranded in an unknown location, with the skull of her Nisse as her only company.

Powering up the machine

In Hilda and the Ghost Ship 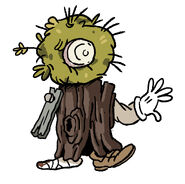 Concept art for the Nisse by Luke Pearson