Hilda: A Netflix Original Series Wiki
Register
Don't have an account?
Sign In
Advertisement
in: A to Z, Characters, T,
and 4 more

The Two-Headed Troll is a troll that is the main antagonist of the graphic novel "Hilda and the Stone Forest". He also appears in Season 2 of the animated series as a recurring antagonist, and in the Hilda Tie-In Series.

Like all trolls, the two-headed troll has a grey, stone-like skin and white, pupil-less eyes. He has two heads, both of which have long noses that all trolls are known for.

The two-headed troll is extremely violent and aggressive, even towards other trolls. He loves to bully other trolls around, and steal from them whatever he wants. He is however terrified of the Rock-Chewing Slugs that inhabit the Stone Forest.

The two-headed troll is first seen when Hilda, Johanna and Twig get lost in the Stone Forest, but manage to escape by hiding between the various items that a female troll was transporting outside with help of a pack goat. Once out, the female troll and some other trolls sat around a campfire to enjoy a meal, when the Two-Headed troll attacked them. He fought off the other trolls and stole the goat and all the cargo it was carrying. By this time, Hilda and Johanna had snuck off, but Twig was still hiding between the cargo and was thus taken back into the Stone Forest by the Troll.

Johanna followed the troll to try and get Twig back, but in doing so got trapped in the troll's lair. She and Twig were saved when Hilda found another way in through a hatch in the floor. While fleeing from the two-headed troll, Johanna and Hilda ran into the female troll and her child again, who took them to safety, possibly since she also hated the two-headed troll.

When Hilda and Johanna tried to escape the Stone Forest the following day with help of instructions given to them by the female troll, they ran into the two-headed troll again. The beast chased them through the forest, but stopped when they entered a tunnel filled with white, rock-eating worms, including a gigantic worm that caused a small cave-in. Once the coast was clear, he resumed the pursuit, but Hilda and Johanna managed to reach the exit of the caves just in time. The troll was running too fast to stop in time, and thus also ended up outside the cave, where the sunlight petrified him into a boulder, that was last seen rolling off the mountain and coming to a stop at the wall of Trolberg.

In "Hilda and the Mountain King", a two-headed troll makes a cameo near the end during The Night of the Trolls. It is not entirely clear if this is the same troll as the one from "Hilda and the Stone Forest".

In the animated series, the two-headed troll is first seen in "Chapter 1: The Troll Circle". He is part of a group of trolls that have gathered outside the walls of trollberg, near the house of an unnamed farmer. When Hilda leads Erik Ahlberg and Gerda Gustav to this group of trolls, the three accidentally get caught in a fight between the trolls. Erik deliberately makes the trolls even more mad by using his bell against them. Gerda tries to fight off the trolls using a weaponized car, but the two-headed troll easily shrugs off her attempts to stop him and wrecks the car. He and the other trolls then chase Hilda and Erik to the farm, but the two narrowly escape him by entering a Vittra tunnel.

The troll next plays a mayor role in "Chapter 13: The Stone Forest", which adapts the graphic novel "Hilda and the Stone Forest". His role in this episode is similar to the graphic novel, in that he serves as the main antagonist who keeps causing trouble for Hilda and Johanna. His status as the big bully of the Stone Forest is further amplified here, with other trolls clearly hating him but being afraid to stand up to him, or losing the fight whenever they try.

The Two-Headed troll has a cameo in "Hilda and the Time Worm". He and several other trolls prepare to attack Trolberg when Erik Ahlberg activates the mechanical bellringers and has all the bells in Trolberg ring at once, but retreat once Hilda and the Keeper of the Bell sabotage these bellringers.

He plays a mayor role in "Hilda and the White Woff", which adapts "Chapter 13: The Stone Forest". 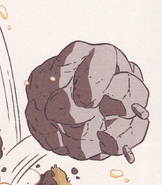 The Two-Headed troll among other trolls (right) during The Night of the Trolls. 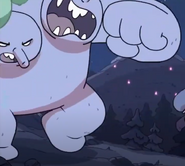 Two-Headed Troll as seen in the Season 2 opening sequence. 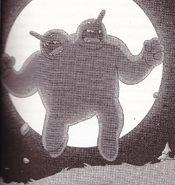 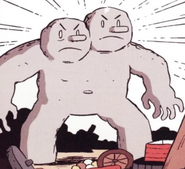