Hilda: A Netflix Original Series Wiki
Register
Don't have an account?
Sign In
Advertisement
in: A to Z, Characters, T,
and 6 more

Hilda and the Mountain King

Trundle, also known as the Mountain King, is a Troll that appears in the sixth issue of Hilda. He is a main antagonist within the story.

Trundle is one of the biggest trolls in the world, towering even over the walls of Trolberg. He has a single, red eye, which can be removed from his body. When removed, the eye resembles a red orb that can allow anyone who touches it see a vision of the future.

Trundle can present himself as a kind soul who wants to help others, but in reality all he wants is to wage war on Trolberg and the humans living there. He is not above tricking people into helping him.

Trundle is the first and only troll to take a leader role and get a large group to agree on one idea. This idea was him waging war on the humans of Trolberg, in the hopes to wake up Amma, the mother of all Trolls who was sleeping underneath Trolberg. However, several trolls, including his older brother, stopped him from completing this plan. He was afterwards stripped of his eye and locked away in a cave with dozens of bells hanging at the entrance to keep him confined. His eye was stored in the ruins of his castle among his treasure.

When Hilda was turned into a troll by Baba's mom, she accidentally stumbled upon the cave and Trundle. Trundle told her he could turn her back into a human if she helped him first. On his request, Hilda removed the bells (using pillows to silence them), and got Trundle's eye out of the ruins. While carrying the eye to Trundle, it granted her a vision in which she saw herself attack a city of tiny trolls, who fought back but this in turn caused a gigantic humanoid resembling Johanna to rise up from the floor and destroy the city.

Hilda was eventually turned back into a human when Johanna and Baba found her and both children were reunited with their real mothers, but by then she had already given Trundle his eye. Baba's mom warned her of Trundle's true nature, but too late; Trundle escaped from his cave and resumed his initial plan. This time he managed to reach Trolberg and smashed a hole through the walls. He was stopped when the Trolberg Safety Patrol used their new weapon against him; a giant version of their torch guns. The ray from the weapon instantly petrified Trundle, and his body subsequently collapsed under it's own weight, falling apart into rocks and the red orb that was his eye. 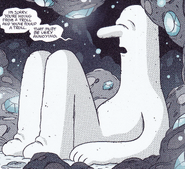 Trundle without his eye

Trundle coming out of "jail cave"