A Troll is a rock like creature that comes in many sizes, resembling rocks in daylight with long noses, and a large beast in the nighttime. They appear in the graphic novel series, the animated series, and the Hilda Tie-In Series.

In the graphic novels, two different origins for the Trolls as a species are given:

The animated series and tie-in novels so far have not given any information regarding the history of trolls.

Trolls are huge, muscular creatures with stone-like bodies. The ones seen in the animated series so far all resemble the troll depicted in the page image: large boulders, but with large stumpy arms and legs, with white blank eyes that seem to glow, and a large mouth with several teeth. In the graphic novels however, Trolls come in a large variety of shapes and sizes.

By day, Trolls petrify into rocks. These Troll Rocks have the appearance of large boulders or stones that still vaguely resemble their true forms, with long nose-like protrusions. According to the troll information book seen in "Hildafolk", the petrification process is not a pleasant or comforatble experience, and on smaller and weaker trolls the effect can be permanent. As such, most trolls will try to avoid sunlight by hiding in caves during the daytime.

However, when night comes, or if a Troll Rock is taken out of the sunlight through other means (like putting it in a darkened room), they will turn into their real appearance.

A lesser known fact is that when Trolls are close to their common ancestor Amma, they can sprout flowers and plants all over their bodies.

Trolls are very strong, even their children, and thus they can cause a lot of damage when angered.

They have their own language that, to humans, sounds like roars, but is actually as sophisticated as the human tongue.

Trolls are meat-eaters by nature, but few of them actually eat humans. The unfortunate human-eating behavior of a few Trolls has given these creatures a bad name. However the majority pose no threat to humans and are content to live their lives undisturbed. Only if threatened will they attack. According to "Hilda and the Hidden People", Trolls are as wary of humans as humans are of them.

Some trolls like to hoard treasures. "Hilda and the Mountain King" shows that Trundle liked to collect gold and jewels, which can still be found in the ruins of his castle. But because these kind of valuables are hard to come by in this day and age, most trolls have settled for more modest objects to hoard. While being led around the Stone Forest by Baba's mom, Hilda encountered Trolls that hoarded car parts, barrels, bones, and even soft furnishings.

It is unknown how Trolls reproduce, but according to Baba's mom in "Hilda and the Mountain King" they are not born the way humans are.

The greatest threat to Trolls is sunlight, since it petrifies them into motionless rocks and thus leaves them defenseless. The Trolberg Safety Patrol have special guns called torches, that can fire rays with an effect similar to sunlight in order to fight trolls. Since they are vulnerable to attacks while in their petrified forms, some trolls take precautions to be unrecognizable as petrified trolls, like concealing their noses. Most trols however hhide from the sun during the day in dark places like caves or tunnels.

Trolls are afraid of bells, a fact stated by Hilda in "Chapter 2: The Midnight Giant", and explained on an information page in "Hildafolk". The reason why is because they experience the ringing of a bell much louder than humans, to the point that it hurts them, thus causing the trolls a great amount of psychological distress. Hilda discovered this herself when she was turned in to a troll in the story "Hilda and the Mountain King". Trolberg has a belltower specifically to keep trolls away from the city.

As seen in "Hilda and the Stone Forest", Trolls are afraid of Rock-Chewing Slugs.

It is possible for Trolls to use magic to switch their children with human children. The human child will become a troll, complete with all the powers and weaknesses trolls have, while the troll child becomes human. The only known way to reverse the spell is to return both human and troll child to their real mothers. This happened to Hilda and Baba in "Hilda and the Mountain King", but has not yet been seen in the animated series.

A baby troll appearing in Chapter 5.

Troll as seen in the opening sequence 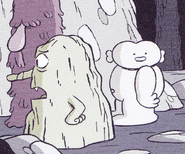 Other variations of trolls seen in Hilda and the Mountain King 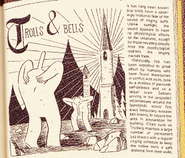 Information on trolls and bells 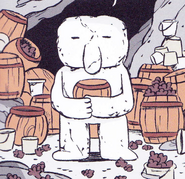 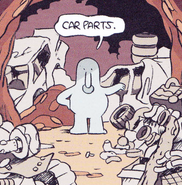 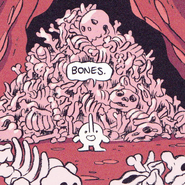 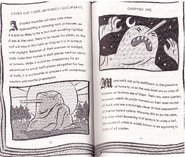 Retrieved from "https://hildatheseries.fandom.com/wiki/Trolls?oldid=9813"
Community content is available under CC-BY-SA unless otherwise noted.