Hilda: A Netflix Original Series Wiki
Register
Don't have an account?
Sign In
Advertisement
in: A to Z, Groups, T,
and 7 more

The group consists of one girl with blonde hair and, in the animated series, small, black eyes like David, and two boys; one brown-skinned and one caucasian.

The animated series does not reveal the names of any of the three.

In the graphic novel "Hilda and the Bird Parade", only the kid with blue and red woolen hat got his name revealed, which is Bagsy, as the kid with bear hat called out for him.

The tie-in novel "Hilda and the Time Worm" states two of them are named Kelly and Anders. Kelly is most likely the name of the girl, which, combined with the aforementioned scene from the graphic novels, makes it safe to say that the boy with the bear hat is Anders, while the other boy is Bagsy.

Kelly is a caucasian-skinned girl with blonde hair in two braids. She has three freckles on both sides of her face. She wears a dark gray sweater and a black skirt. Her leggings are maroon red, and she wears a scarf the same color as her leggings, and her shoes are darker.

Bagsy is a caucasian-skinned boy and has dark blonde hair the same color as David's. He wears a medium light medium dark blue sweater and some black leggings. His boots are red and similar to Hilda's. He has a scarf with the same shape and pattern as Hilda, but red. He also wears a blue and red beanie.

Anders is a short and somewhat chubby boy. He is brown skinned and has hair darker than his skin. He wears an orange vest, black pants, and orange white-soled shoes with a light cream bear hat and white glasses.

The dark skinned boy has a cameo in "The Midnight Giant" along with Trevor. The other two are first seen in "Chapter 3: The Bird Parade".

When Hilda came across them in Trolberg, they allowed her to hang out with them. However, Hilda soon came to realize these kids were not like her.

When Trevor hit a talking raven and tried to prove his friends the bird could talk, they didn't believe him and mocked him for it. His further attempts to prove himself right only resulted in more humiliation.

The three are also seen in "The Troll Rock" during the parent's night at The Ahlberg School, mostly as background characters.

Frida approached the dark skinned boy in "The Ghost" trying, unsuccessfully, to convince him to vote for her as class president. Near the end he, Trevor and the other members made a cameo appearance in the school assembly theatre where the candidates for class president were giving their speeches.

Near the end of "The Black Hound", they are briefly seen along with Trevor and The Librarian.

In "The Yule Lads", they help Trevor to attack the Sparrow Scout's broth stand with snowballs, and subesequently come under attack themselves from the Yule Lads. For some reason, the Lads don't decide to target them as sacrifices for Gryla, and only take Trevor and his mom.

In the movie, all three of them can be seen in Ms. Hallgrim's class while officer Selby shows the students a video about the dangers of trolls. When Frida protests against the highly inaccurate video, Anders is one of the few who believes her and is later seen at Frida's and David's protest against the Safety Patrol.

In the graphic novels, they only appear in "Hilda and the Bird Parade", but in a smaller role than the animated adaptation. A major difference between the two incarnations is that in the graphic novel, they come to Hilda's house to ask her to hang out with them, rather than Hilda asking them. After the incident where Trevor hits the raven with a rock, they flee the scene and are not seen again for the remainder of the story. Trevor never tries to convince them the Raven can talk.

Trevor and friends in the graphic novels 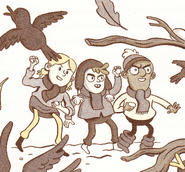 Trevor and two of his friends in Hilda and the Great Parade.