Hilda: A Netflix Original Series Wiki
Register
Don't have an account?
Sign In
Advertisement
in: Creatures, T, A to Z

This is a list for the unnamed Monsters that work for Matilda Pilqvist. They guard the magical maze that one has to navigate to get from Witches Tower to her house. They all appear in "Chapter 3: The Witch", and it's adaptation "Hilda and the Ghost Ship".

This sphinx-like creature is the second monster. When Frida, Hilda and Kaisa encounter it, the creature spits out 3 stones, a sheet of paper and a quill. We don't get to see what is written on the paper, but considering this is a sphinx is it most likely a riddle or puzzle. Frida manages to solve it. 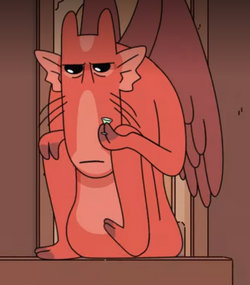 This red Gargoyle-like creature blocks the next door of the maze. Hilda, Frida and Kaisa have to brew a potion for him in order to gain passage. Kaisa almost gives the potion too soon, but Frida realizes the error and adds the final ingredient. The gargoyle accepts the potion and moves aside to let them pass.

This fish-like creature is actually helpfull. It gives the three protagonists a ride across the water, but therefor they first willingly had to allow the fish to swallow them. When questioned by Hilda how Frida knew the fish wouldn't eat them instead, Frida answered she noticed the creatue didn't eat any of the other fishes.

The name of the creature is given in "Hilda and the Ghost Ship".