Hilda: A Netflix Original Series Wiki
Register
Don't have an account?
Sign In
Advertisement
in: Festivals, A to Z, T

The Night of the Trolls

The Night of the Trolls is a special night in Trolberg, established at the end of "Hilda and the Mountain King" (and the Movie adaptation) under approval of Erik Ahlberg (graphic novel)/Gerda Gustav (animated series) and the Trolberg Safety Patrol.

The night is held every year on the anniversary of the night that Trundle attacked Trolberg. During this night, Trolls are allowed to enter the city of Trolberg, so they can be near their ancestor Amma (who is sleeping underneath the city), and sprout flowers. The many bells in and around Trolberg are silenced during this night.

According to Hilda, not everybody approves of the night, since many people still fear trolls, but it is a start in working towards a more peaceful coexistance between humans and trolls.

Trolls marching through the streets. 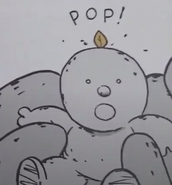 The gates are opened.

Trolls gathering in the square above Amma