Hilda: A Netflix Original Series Wiki
Register
Don't have an account?
Sign In
Advertisement
in: Objects, A to Z, Literature, L

The Legend of Great King Condon 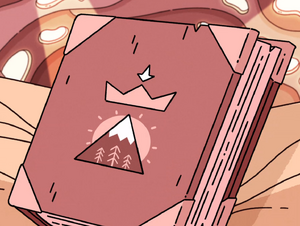 The Legend of Great King Condon is a book from the Hilda television series. It is the favorite book of Frida and Craigie Williams.

The book went missing in "Chapter 9: The Ghost", after which finding it again became a subplot for the rest of Season 1 up until "Chapter 13: The Black Hound".

The book is a fantasy novel about a boy who grew up to be wise king.

According to Frida, it's full of grand adventures and pithy wisdom, but also contains several battle scenes that are quite bloody.

Back when he was still alive, Craigie Williams already loved The Legend of Great King Condon. After his death, his book eventually ended up in the hands of Frida, who also fell in love with it. Craigie, now a ghost, visited Frida's house every night to read the book and relive the memories. Out of gratitude for cherishing the book as much as he did, he cleaned Frida's room for her every night.

In "Chapter 9: The Ghost", the book vanished, and Craigie subsequently stopped visiting Frida. Frida herself discovered the book had gone missing after Hilda and David helped her clean up her room. Upon realizing the book once belonged to Craigie (his name was written in it), the three friends visited him at the graveyard, thinking he had taken it. Craigie denied having taken the book, and suspected his sister Engilbjort to be the thief. Hilda, Frida and David challenged her to a wrestling match for it, and when they lost Hilda prevented Engilbjort from going back to her grave. Ultimately however, it was revealed Engilbjort never had the book.

At the end of Chapter 9, the viewer got to see that the book was actually taken by A nisse, who had brought it with him into the Nowhere Space of Frida's house.

In "Chapter 10: The Storm", Hilda mentions she planned to go to the library to find a new copy of The Legend of Great King Condon, but decided against it when it started raining.

In "Chapter 11: The House in the Woods", while she was trapped in the magical house in the woods, Hilda used the house's powers to summon a new copy of The Legend of Great King Condon. This copy however vanished along with everything else the house had created after Hilda and her friends escaped from it.

In "Chapter 13: The Black Hound", Hilda finally found Frida's copy of The Legend of Great King Condon when she and Tontu were being chased by The Black Hound throughout Nowhere Space. She had just enough time to take the book out of Nowhere Space and put it on Frida's bed before having to flee from the hound again.