Hilda: A Netflix Original Series Wiki
Register
Don't have an account?
Sign In
Advertisement
in: Creatures, Locations, T,
and 2 more

The House in the Woods (creature) 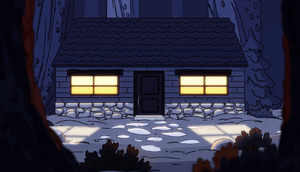 The House in the Woods is a magical, sentient house first seen in the titular episode.

The House is located in the middle of the Great Forest outside Trolberg.

From the outside, it looks like a normal wooden/brick cabin with two floors and an attic.

In its default state, the interior looks like one would expect from a house; a furnished living room, kitchen, and at least one bedroom. The house can however freely change its internal appearance to any form it desires, even normally impossible ones. These involve becoming much bigger on the inside, and warping dimensions and geometries around to bizarre shapes.

The House lures in unexpected visitors, and keeps them trapped. While they are inside it, the house will provide them with anything they wish for, which it can conjure up out of nothing. However, it will never let its victims escape if possible. To this end, the house will lock up, teleport victims back inside if they try to escape through the windows, and change its entire interior to bizarre shapes to confuse the victim. It appears to be able to read the victim's mind beside what they wishes too, as it knows Hilda and Wood Man's relatives and put them into picture frames inside the house.

It can however even create a doorway to any other place on earth in case it decides to let a victim go.

There seems to be no limit to what the house can create, but there is a limit to how much it can create at once. When the victims demand too many objects at the same time, the house overloads and the summoned objects begin to flicker in and out of existence.

Hilda however was able to figure out the house's weakness, and the five of them began to overload it, driving the house to the limit of its abilities. When at the height of this Hilda demanded a way home, the House gave in and created a door straight back to Hilda's house in Trolberg.

The House by daylight

The House fights back

Portrait gallery near the attic door

From the attic back to the living room

It becomes too much for the house

A door from the house to Hilda's house.