Hilda: A Netflix Original Series Wiki
Register
Don't have an account?
Sign In
Advertisement
in: A to Z, Groups, S

Johanna
The Sparrow Scouts are a scouting group in Trolberg for both boys and girls. The group is led by an adult woman named the Raven Leader.

They have their headquarters in a wooden cabin called the Scout Hall, just outside the city limits though still within the City Walls. Like many scout troops, they encourage their members to be helpful to everybody and take good care of nature.

It's unknown when exactly the Sparrow Scouts were founded, but since Johanna was also a member during her own childhood, they must have been around for at least a few decades already. In the novel "Hilda and the Nowhere Space", the scouts hold their ninety-third badge ceremony, which is an annual event.

The Sparrow Scouts uniform consists of:

The Sparrow Scouts have their own oath, which new members have to cite from mind during their initiation ceremony:

I promise to be trustworthy, useful, and helpful to others.
To be a friend to all people, animals and spirits.
To never be a snob, to be courageous, to do a good thing every day.
To smile and to whistle, and to keep the Sparrow Scout law.

Afterwards, as an unofficial tradition, new members are welcomed with a game of stingball.

All Sparrow Scouts can earn merit badges for performing various tasks. Earned badges are handed out at the end of the year during the badge ceremony, and can be worn on the sash.

Badges can be upgraded with golden wings if the task in question is performed exceptionally well or if a Sparrow Scout meets extra criteria.

Exclusive to the graphic novels

Exclusive to the Hilda Tie-In Series

In the animated series, the Sparrow Scouts have their own choir named the Warblers.

Every year, for at least four days in a row, auditions for this choir are held. The choir mostly consists of singers, but also has several instrument players, including at least one piano player and a triangle player.

The warblers occasionally give concerts in the Scout Hall for the parents.

The graphic novels make no mention of the warblers, and in the novelization the only evidence that they exist comes from David getting the choral singing badge.

Every year, before the badge ceremony, the Sparrow Scouts end the year with a camping trip at Camp Sparrow in the Huldrawood. The camp is held over a period of several days, though during Hilda's first camping trip (seen in "Hilda and the Black Hound"/ "Chapter 12: The Nisse" + "Chapter 13: The Black Hound") it was ended after just one night due to The Black Hound being sighted in the woods.

Besides Camp Sparrow, the Sparrow Scouts occassionally also organize camping trips outside the walls of Trolberg, where scouts have to navigate through the wilderness for 3 days.

Once a year, the Sparrow Scouts hold a jumble sale. Members will go from door to door to collect objects that people will donate for the sale. Collecting enough stuff will earn members the fundraising badge.

During the Trolberg Winter Festival, the Sparrow Scouts sell their famous vegetable broth. The broth is prepared according to a secret recipe.

collecting stuff for the jumble sale 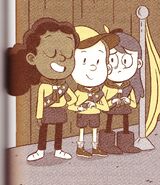 Frida, David and Hilda during the badge ceremony in "Hilda and the Nowhere Space".

Guide to the Uniform from Hilda's Sparrow Scout Badge Guide 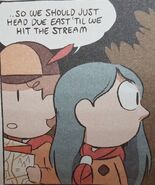 David (with cap) and Hilda in the novel as sparrow scouts