Hilda: A Netflix Original Series Wiki
Register
Don't have an account?
Sign In
Advertisement
in: A to Z, S, Objects 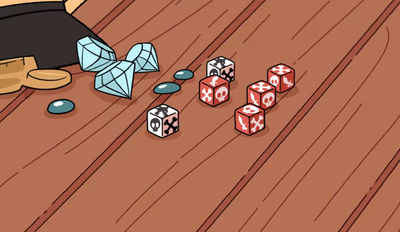 Sea Bones is a game of chance seen in the animated series.

The game involves six dice, two white and four red, decorated with various symbols, including a skull, crossed bones, a dragon and a cutlass.

In "Chapter 2: The Draugen", Wood Man is in the Salty Maiden, playing a game of Sea Bones with several sailors, including the peg legged sailor and a bearded sailor. When Hilda finds him, he has just won the last round, and claimed his price, including a boat.

The rules of Sea Bones are left unexplained, but a few details can be gleaned from the episode.