Hilda: A Netflix Original Series Wiki
Register
Don't have an account?
Sign In
Advertisement
in: S, A to Z, Locations The Screaming Stones are a pile of rocks located in a swamp deep in the Forest of Nott. In the graphic novels, they can only be seen on a map of Trolberg and surrounding areas, but the location plays a role in the animated series, episode "Chapter 4: The Eternal Warriors".

The stones are named because many people who where near them heard screaming at night coming from near the stones. In reality however, this screaming was not coming from the stones themselves, but from the Knudsen clan and Torgund's clan during their many battles.

In "Chapter 4: The Eternal Warriors", while they are camping with the Sparrow Scouts, Hilda convinces David and Frida to visit the stones. They camp close to the stones that night. When David wanders off on his own and first falls off the side of the mountain, and later gets involved in the fight of the viking clans, Hilda and Frida mistake his screams for those of the stones, and thus don't come to his aid. The next day they reach the stones, and learn that they are just ordinary rocks; a collection made by Sigurd, who lives in the swamp. 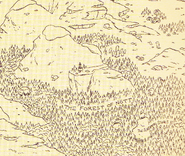 Map depicting the Screaming Stones in the Forest of Nott

Screaming Stones in Hilda and the White Woff
Community content is available under CC-BY-SA unless otherwise noted.
Advertisement