Hilda: A Netflix Original Series Wiki
Register
Don't have an account?
Sign In
Advertisement
in: A to Z, Characters, S,
and 3 more

A Salt-Lion is a large ferocious creature that resembles a cross between a fish and a tiger.

Salt-Lions are playful aquatic creatures, that are fiercely protective of their young. They can switch from docile to dangerouns on a whim. When they think their young are in danger, they will display an agressive show with loud roaring, which looks imitating but seldomly leads to them actually attacking.

They normally live underwater within the ocean. Their paws allow them to walk on land as well as swimming, thus making them amphibious, though thye can only make short stints on the shore. They can leap high out of the water, and like to have competitive games like seeing who can leap the highest.

They tend to follow Draugen-ships in hopes to devour any new recruits thrown overboard.[1]

In the animated series, a few Salt-Lions make a cameo in Chapter 7: The Lost Clan. They can be seen leaping out of the water while Hilda and Frida are riding a Water Spirit to the island of the Lindworm. They are not identified by name in this scene.

In "Chapter 2: The Draugen", Hilda, Twig and Wood Man encounter some Salt-Lions while sailing. Later, after having been captured by the Draugen, the Draugen try to feed the three to the Salt-Lions so they can join them as Draugen. Before this happens, Hilda challenges the Draugen to a race for their freedom.

In "Chapter 13: The Stone Forest", an adult and a young Salt-Lion are briefly seen when Tontu tells Alfur about his misadventures while trying to return home.

In the graphic novel Hilda and the Bird Parade, Hilda and the Great Raven encounter a young salt-lion and it's mother. The mother prepares to attack them to protect her young, but almost immediately backs off again when she is frightened by the shadow of what appears to be the Rat King (but is actually just 3 white mice). This scene was left out of the animated adaptation of the novel.

Another salt-lion is seen in one panel of "Hilda and the Stone Forest", during a compilation of Hilda's various adventures.

Young Salt-Lion, as seen in "Hilda and the Bird Parade"

Adult Salt-Lion, as seen in "Hilda and the Bird Parade"

Salt-Lion in Hilda and the Stone Forest 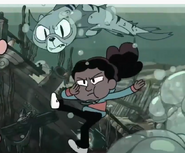 A Salt-Lion as seen in the season 2 opening sequence 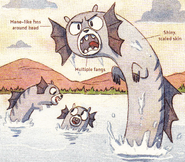 From Hilda's Book of Beasts and Spirits.