Hilda: A Netflix Original Series Wiki
Register
Don't have an account?
Sign In
Advertisement
in: A to Z, Characters, R, Creatures

Rock-Chewing Slugs are white slugs that live in underground places. As their name suggests, they are capable of biting through rocks, which seem to be their main diet.

Most are small, barely larger than regular slugs, but in the Stone Forest lives at least one giant-sized slug.

Trolls are afraid of them.

Hilda made great use of the slug's ability to chew through hard material when she had tried to find her mother and Twig, but found her path blocked by a hatch with a padlock. She picked up a slug and tricked it into biting through the padlock.

Later in the same story, Johanna and Hilda managed to temporarily escape the Two-Headed Troll that was chasing them by running into a cave filled with these slugs, including a gigantic one. The troll didn't dare to follow them there.

In the animated series, a rock-chewing slug has a cameo in "Chapter 4: The Sparrow Scouts", where it is seen in one of the Vittra tunnels.

The slugs are prominently featured in "Chapter 13: The Stone Forest", which adapts "Hilda and the Stone Forest". Like in that story, they populate the Stone Forest, Hilda uses one to open a padlock, and Johanna and Hilda are able to hide from the Two-Headed Troll by fleeing into a tunnel full of the slugs.

The slugs appear in "Hilda and the White Woff", which adapts the events of "Chapter 13: The Stone Forest". They are called rock-eating slugs here, and Hilda recalls reading about them in Emil Gammelplassen's book Caves and their Unfriendly Occupants. 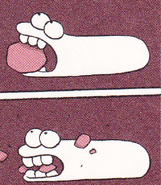 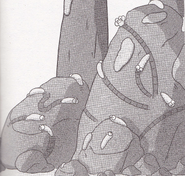