Hilda: A Netflix Original Series Wiki
Register
Don't have an account?
Sign In
Advertisement
in: A to Z, Characters, R,
and 3 more

The Rat King is the name of a large cluster of rats, first seen in "Chapter 6: The Nightmare Spirit". They only appear in the animated series.

The dozens of rats that make the Rat King are tied together with their tails. All of these rats are capable of human speech, and have human level intelligence. They share a single consciousness and always speak in perfect union, but still still refer to themselves in the plural ("we"). They have glowing, red eyes and move around by rolling around the ground in a large ball.

According to Hilda's Book of Beasts and Spirits, the Rat King came to be when at some point in Trolbergs history, dozens of the rats racing around in the sewers became hopelessly tangled together with their tails. Over time, they came to speak, think and act as one.

The Rat King is the keeper of all secrets of the people in Trolberg. They get most of these secrets from the rats that overheard them, or by trading them with others. The Rat King is an ally of the Marra, and they frequently exchange secrets, but the king is not afraid to reveal secrets about them if they can get something for it in return.

When Hilda, David and Frida visited the Rat King in the sewers, they revealed to Hilda that a Marra was responsible for David's nightmares in return for Hilda telling them her secret; that she's afraid of riding a bike and doesn't want her friends to find out. The Rat King later gave this secret to the Marra, who used it against Hilda to give the girl a nightmare.

In The movie, the Rat King is briefly seen panicking when Trundle attacks the city and Amma begins to awaken. 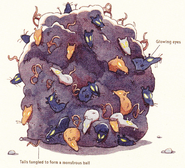 Rat King as seen in Hilda's Book of Beasts and Spirits.
Community content is available under CC-BY-SA unless otherwise noted.
Advertisement