Hilda: A Netflix Original Series Wiki
Register
Don't have an account?
Sign In
Advertisement
in: Characters, Elves, Groups,
and 5 more

They ride on rabbits and are armed with slings, which they use to throw rocks at their enemies.

In all three incarnations, the cavalry attacks Hilda and Alfur when the two tried to reach the Prime Minister. Twig however easily scared them off.

The commander of the cavalry 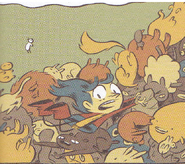 In the graphic novel

The Light Brigade in "HIlda and the Hidden People".