Hilda: A Netflix Original Series Wiki
Register
Don't have an account?
Sign In
Advertisement
in: Creatures, A to Z, N

Nittens are tiny, catlike creatures, about the size of lice.

They are kept as pets by Elves, like the Elf mayor, who has a nitten named Angelina.

Nittens like to hide in the hair of humans, and presumably also animals. While there, they can cause symptoms identical to head lice, most prominently an itchy skin.

Angelina and her young are velourian silkhair. It's unknown how many other breeds of Nittens there are.

In "Chapter 1: The Hidden People", Angelina hides in Hilda's hair and gives birth here. Her litter is found crawling around in Hilda's hair at the start of "Chapter 2: The Midnight Giant". This same scenario also happened in the graphic novel "Hilda and the Midnight Giant" and the novelization "Hilda and the Hidden People". In the latter, Alfur mentions he would bring the Nittens back to Angelina.

In "Chapter 5: The Troll Rock", Hilda takes the Nittens to school as a project for Parents Night, but they escape due to a Baby troll and infect several people, including Ms. Hallgrim and Principal Magnusson. This scenario did not happen in the graphic novels. The novelization "Hilda and the Great Parade" also shows Hilda bringing the Nittens to school for her Wonderful Trolberg project (which means Alfur didn't return them to Angelina after all, despite his claims). Like in the animated series, they escape thanks to the baby troll, but the aftermath is not shown.

In "Chapter 12: The Replacement", Alfur is revealed to own a Nitten named Peppercorn.

Hilda brought the Nittens to school. 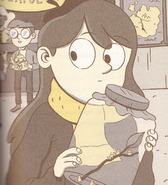 Hilda with the Nittens in "Hilda and the Great Parade".
Community content is available under CC-BY-SA unless otherwise noted.
Advertisement