Hilda: A Netflix Original Series Wiki
Register
Don't have an account?
Sign In
Advertisement
in: Objects, A to Z, M 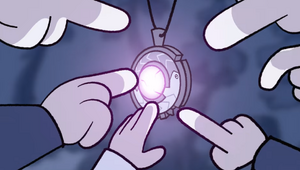 The Medallion of Sigurd is a magical medallion that has the power to forever remove all feelings of fear in those that touch it. It plays an important role in "Chapter 4: The Eternal Warriors", and the first part of "Hilda and the White Woff".

The Medallion originally belonged to Sigurd, a creature living in the Forest of Nott. Several centuries ago, two rivalling clans of vikings, the Knudsen clan and Torgund's clan, came to look for the Medallion because they hoped to become better warriors once the Medallion had taken away their fear. One of these groups managed to steal the Medallion from Sigurd, but quickly fell victim to a side effect; without their fear, they became reckless, and thus incapable of fighting smart. They were slain by their rivals, who then took the Medallion and suffered the same fate. Sigurs, knowing the side-effects of the Medallion, never bothered to retrieve it for this very reason, but he did use the Medallion and a potion that could revive people to trap the clans in an endless battle for centuries.

In "Chapter 4: The Eternal Warriors", David joins Torgund's clan because he hopes the Medallion will finally make him a better friend for Hilda and Frida, since he feels his fears are holding them all back. It works, but he too becomes reckless, and is eventually killed because of it until Sigurd revives him.

The Medallion was last in the hands of the Knudsen clan.

The only way to reverse the effects of the Medallion is to kill and revive the affected person.