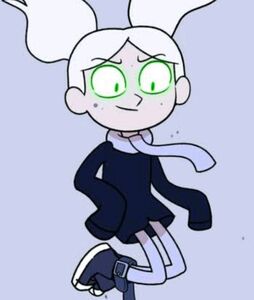 The Marra are human like creatures that reside in the Huldrawood, and haunt the streets and houses of Trolberg at night, looking for timid people to scare and give them nightmares.

They are exclusive to the animated series and its novelization; they do not appear in any of the graphic novels.

The exact nature of Marra is not quite clear, and there is contradicting information. According to a library book that Hilda, Frida and David read in Chapter 6: The Nightmare Spirit, the Marra are spirits. However, when they're not using their powers, they look just like human teenage girls. One of them, Kelly, is even seen living in a normal house with her (seemingly non-Marra) mother. She also mentioned Frida would make a good Marra. This suggests the Marra are humans with special powers, and it's possible for regular humans to be turned into Marra by getting recruited.

Marras are often seen as regular teenage girls. However, they have unusual traits, such as glowing green eyes and the ability to float around. They can also teleport short distances or squeeze through tiny holes, like key locks, by turning into green wisps.

Marra have a weakness towards leather belts, A human can ward off a Marra by securing his or herself to the bed with a belt, and a belt can be used to capture and trap a Marra.

Marras are active during both the day and the night. During they day, they mostly like to hang out, act laid-back and mysterious, as seen by David's Marra. However, for Marras such as Kelly, they also enjoy to do things normal teenagers do, such as watch television.

During the night, they visit sleeping humans in their rooms by turning into light green wisps and entering through the keyhole. They then use their ability to create nightmares for people out of their fears.

After successfully having scared a victim, they regroup with their fellow Marra in the middle of the Huldrawood. Here, they share with each other the nightmares they gave their victims, and use their powers to shape the flames of a green campfire into visuals of these nightmares. When they are done telling, these visuals are absorbed by all Marra present. Presumably, this is how they feed.

When disturbed, they turn into light green wisps and escape, as well as blow out the fire.

According to Alfur, the Marra have no paperwork on file with the elves, therefore being unable to actually see them.

“His nightmare's are the best!”

WHY YOU LITTLE SON OF A-! 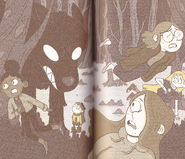 The Marra in "Hilda and the Nowhere Space"
Add a photo to this gallery
Retrieved from "https://hildatheseries.fandom.com/wiki/Marra?oldid=8246"
Community content is available under CC-BY-SA unless otherwise noted.