Hilda: A Netflix Original Series Wiki
Register
Don't have an account?
Sign In
Advertisement
in: A to Z, Characters, L,
and 5 more

Linn Jacobsen[1] is a character who appears briefly in several episodes of the animated series, and the Hilda Tie-In Series. All of her appearances in Season 1 are on television in news reports about The Black Hound.

She is a tanned woman with medium length curly brown hair. She wears a grey suit jacket with a white undershirt.

Her first appearance was a brief clip in Chapter 10: The Storm, when Hilda turned on the news she appeared to be talking about The Black Hound but the signal was distorted due to the storm.

In Chapter 12: The Nisse she was presenting the news about more Black Hound sightings overnight as Johanna and Hilda watched the news. Her presentation also included an interview about an alleged sighting.

Later in Chapter 13: The Black Hound she gave a news update where Trolberg city officials had reason to believe that three people had been eaten by the hound. She was going to give more details before Johanna turned the TV off.

At the end of Chapter 1: The Troll Circle, she is seen interviewing Erik Ahlberg about his inspection of Trolberg's defenses. Erik tells her about the many Vittra-tunnels underneath the city, and assures her they will be taken care off.

In Chapter 7: The Beast of Cauldron Island, she has a brief cameo in a news story about the Kraken seen in the harbor.

Early in Chapter 13: The Stone Forest, she is once again seen interviewing Erik Ahlberg, this time about the increased number of Troll bonfires seen in the mountains each night.

First appearance in a broadcast garbled by the storm.

Evening news about the Beast of Trolberg. 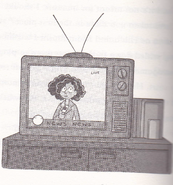 In "Hilda and the Ghost Ship"