Hilda: A Netflix Original Series Wiki
Register
Don't have an account?
Sign In
Advertisement
in: Locations, A to Z, H

Hilda, Johanna, Twig
Hilda's House was the house that Hilda, her mother Johanna and Twig used to live in before moving to Trolberg. It appears in the graphic novels and the animated series.

The house was a relatively small, two-story wooden cabin. Known rooms included a living room with a fireplace, and separate bedrooms for Hilda and Johanna. The house had its own windmill for generating electricity. The house was located in the middle of a valley, miles away from any other human settlements. Only a small road connected the house to the rest of the area.

Whom the house was built by varies between incarnations; in the graphic novels, it was Hilda's grandfather, but in the animated series and tie-in novels, it was her great-granddad. Hilda and Johanna had lived in the house for Hilda's entire life. Unknown to any of them, it was located in the middle of an elf village.

In both the graphic novels and the animated series, the house was eventually destroyed when a giant accidentally stepped on it (Valfreyja in "Hilda and the Midnight Giant" and Jorgen in "Chapter 2: The Midnight Giant" respectively). This forced Hilda and Johanna to move to a different house in Trolberg.

In the animated series, the house was seen again as part of Hilda's nightmare in "Chapter 6: The Nightmare Spirit". This scene does not appear in the graphic novels however.

Its remains were seen again in "The Black Hound" when Tontu and Jellybean ended up there, and in "The Deerfox". The house is seen intact in flashbacks in the latter episode. 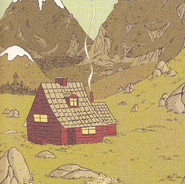 The house, as seen in Hildafolk.

The House as seen in the opening credits

The house is crushed by Jorgen

Jellybean at the ruins of the house

The house in "Hilda and the Hidden People"