Hilda: A Netflix Original Series Wiki
Register
Don't have an account?
Sign In
Advertisement
in: Locations, A to Z, H

Hilda, Johanna, Twig, Alfur, Tontu
Hilda's house is a building in the city of Trolberg, where Hilda and Johanna go to live after the destruction of their previous house. It's been their home since "Hilda and the Bird Parade" (graphic novels) / Chapter 2: The Midnight Giant (animated series) / "Hilda and the Great Parade" (novelization).

The number of the house is 3.

The building has four floors overall, with Hilda's house consisting of the top two. The two floors below are another apartment. The flooring is some form of linoleum/tile, and the walls have red wallpaper.

The house has two bedrooms, a combined kitchen-living room, and a bathroom. Like many houses, it has a version of Nowhere Space that, up until chapter 13, was inhabited by the Nisse Tontu. After Tontu and their dog Jellybean got lost, another Nisse, also named Tontu, moved in here.

It is also revealed in the animated series that about 50 years before Hilda and her mother moved in, a different building resembling a hotel used to occupy the area. Yet the interior resembles the entrance of the apartment building with the same columns suggesting at some point the original structure may of been broken up into smaller buildings or partially demolished and converted into the apartments there now.

The hallway is the entrance to Hilda's apartment. It has a dresser with books and a potted plant, a coat rack, a bench, two paintings, a lamp, a trash can, and a closet.

The bathroom contains a bathtub, a sink, an orange shower curtain, a toilet, and a potted cactus.

Hilda's bedroom has white carpeting and a striped rug. There is a rope of fairy lights strung across the shelves above her desk, which are covered in books and trinkets from the wilderness. On her desk is a lamp. There is a wardrobe at the foot of her bed.

The living room contains a television and a table with a white tablecloth, where Hilda and Johanna eat. There is a couch, and a television. On one side is a dresser, a desk, a bulletin board, a lamp, and a large easel, which make up Johanna's workspace. It is connected to the kitchen.

The kitchen seems completely normal, with a refrigerator, white countertops covered in various items, and some shelves. It is connected to the living room.

Alfur has his own home within Hilda's room. It is the size of a bird house, and stands on a shelf above her desk. Inside, he has a bed, a desk, and decorations like plants and paintings. 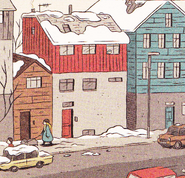 The house in the graphic novels

The house 50 years ago