Hilda: A Netflix Original Series Wiki
Register
Don't have an account?
Sign In
Advertisement
in: A to Z, Characters, G,
and 5 more

Gryla is an ogress that appears in the Season 2 episode "Chapter 10: The Yule Lads", as well as the tie-in novel "Hilda and the Time Worm".

Gryla is a gigantic, hunchbacked ogress, with a body covered in thick fur. She has sharp spines on her back and antlers on top of her head. Her face is covered by a mask to protect her ancient skin against the moonlight.[1] The mask is broken around her left eye. She is clothes in rags.

According to legend, Gryla has the ability to sniff out naughty children, and feeds on them by making a stew out of them. She sleeps most of the year, but awakens around the time of the Trolberg Winter Festival to feed.

Gryla is at least several centuries old. Very few have ever seen her. At some point in the past, 13 of the children she abducted came to work for her as the Yule Lads. She keeps them in line with the threat to eat them if they don't find her any other naughty children to eat.

In "Chapter 10: The Yule Lads"/"Hilda and the Time Worm", she is seen slowly making her way to Trolberg. Along the way, she frightens even Baba and Baba's mom. Somehow, she manages to get into the city unnoticed. By the time she gets there, the Yule Lads have been convinced by Hilda to give her the Sparrow Scouts' vegetable broth as a substitute for humans. Fortunately, Gryla accepts the alternative and leaves again.

Gryla and her Yule Lads as seen in a book 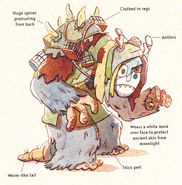 Gryla in "Hilda's Book of Beasts and Spirits"