Hilda: A Netflix Original Series Wiki
Register
Don't have an account?
Sign In
Advertisement
in: TV series staff, People, A to Z, G 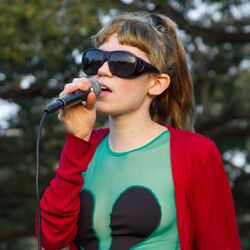 Grimes began releasing music independently in the late 2000s, releasing two albums, Geidi Primes and Halfaxa in 2010 on Arbutus Records. She subsequently signed with 4AD and rose to fame with the release of her third studio album Visions in 2012. It produced the singles "Genesis" and "Oblivion", and received the Juno Award for Electronic Album of the Year.