Hilda: A Netflix Original Series Wiki
Register
Don't have an account?
Sign In
Advertisement
in: A to Z, Groups, G,
and 3 more

"Chapter 9: The Ghost"
Ghosts are spirits of deceased humans, that for some reason have remained on Earth.

They are exclusive to the animated series, and do not appear in any of the graphic novels.

Ghosts look like transparent/blue, humanoid beings whose form still somewhat resembles how they looked when they were alive.

They have glowing skulls with black eyes and a mouth.

They carry their skeletal remains inside their spectral bodies.

Ghosts can fly and their transparent bodies + glowing skulls can freely phase through any solid matter. Their bones however can not, so these will remain behind if a ghost tries to pass through something solid.

They can also absorb objects and people inside their bodies.

Since their bones cannot phase through solid matter, it is possible to keep a ghost from returning into his/her grave by putting something solid on top of it. Hilda used this against Engilbjort in Chapter 9: The Ghost by lying down on her grave so she couldn't get in.

In season 1, Ghosts can only come out at night, and must be back in their graves before sunrise. What exactly happens to them if they don't is not revealed in the series, but in chapter 9 the threat of being left outside in the sun was sufficient enough to make Engilbjort give back the book she stole. Season 2 downplays this weakness however, as both ghosts and Draugen are seen during the twilight instead of only when it's fully dark. According to "Hilda's Book of Beasts and Spirits", ghosts that stay outside in the sun will shrivel up.

It is unknown why Ghosts remain earthbound, and if this happens to all humans or only a select few.

Ghosts are known to seek out personal objects that belonged to them when they were alive, and that they still cherish. They can grow fond of any new owners of these objects, and help them out if these owners cherish the object as much as they did. Craigie Williams for example cleaned up Frida's room every night for years since she loved his favorite book "The Legend of Great King Condon".

Sometimes they seek out still living loved ones, but this is rare since these loved ones will someday die as well, and then they will all be reunited.

Ghosts love to wrestle, and use this to settle conflicts. They do value fair play, and matches are overseen by a referee.

It is possible to purposely summon a ghost from its grave. The ritual to do so involves a spell, and a special wooden stick engraved with runes.

To summon the ghost, one has to roll the stick over the grave back and forth, and chant the following words:

Deep in the earth, your moldering bones for posterity lay.
But on this night they stir and moan, when you come out to play. 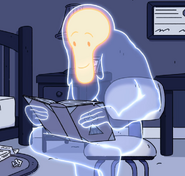 A ghost without bones, only a skull and body. 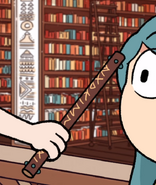 The book with the spell

A ghost as seen in the Season 1 opening sequence