Hilda: A Netflix Original Series Wiki
Register
Don't have an account?
Sign In
Advertisement
in: Pages with reference errors, A to Z, Groups,
and 7 more

Forest Giants are a species of giant. They have blueish-green fur, antlers, and glowing white eyes. They are the closest living relatives to the giants of old and their age is unknown.

In the graphic novels, 2 forest giants have a cameo on the first page of "Hildafolk". Later in the same story, Hilda and Twig come across a forest giant who is trying to find his way around the woods, but complains that his map is useless since everything looks the same from above.

A forest giant is first seen on an illustration in the book "Giants of Old" in "Chapter 2: The Midnight Giant"

In "Chapter 6: The Nightmare Spirit", a forest giant is seen in a nightmare given to Hilda by David's Marra.

The first Forest Giant to make a physical apperance in the show appears in "Chapter 11: The House in the Woods". This is the only one that Hilda ever interacts with in the series, but in her nightmare in "Chapter 6" she remarked that "Forest Giants do not eat people", thus proving there are more. The Forest Giant seen in "Chapter 11" likes to play cards with Elves and the Wood Man. Everything he wins in these games, and other objects he finds, he stores in a hollow tree. The Wood Man deliberately bet Hilda in their game and lost her to him, knowing the Giant would take her back to his tree, thus putting her in a position to help him steal back some other items he lost to the giant. They were caught in the act however and barely escaped. Later, Alfur and Twig also found the tree while looking for Hilda. The Giant caught them too and demanded they would bring him to Hilda, but the Great Raven interfered and drove the giant off.

In "Hilda and the Hidden People", Hilda briefly catches a glimpse of a Forest Giant when she and Johanna are on their way to Trolberg, and remarks how much smaller the giant is compared to Jorgen.

"Hilda and the Nowhere Space", which adapts the events from season 1's "Chapter 6" and "Chapter 11", features both the Forest Giant from the nightmare created by David's marra, and the real Forest Giant that Wood Man ends up losing Hilda to. The scene in which this giant also attacks Alfur and Twig, and is driven off by the Great Raven is omitted from the novelization.

In "Hilda and the White Woff", Frida and David briefly spot a Forest Giant when they go to the Great Forest to look for Hilda and Johanna.

In contrast to the ancient giants like Jorgen, who are big as mountains and usually have a calm, friendly personality, Forest Giants are about the size of a tall tree.

The one that Hilda meets in "Chapter 11" and "Hilda and the Nowhere Space" is also quite obnoxious, and seems to suffer from an inferiority complex due to not being as big as other giants. He complains to Hilda how humans always overlook him due to his small size, and later refers to other giants as "Proper Giants" (something he immediately feels ashamed of for admitting). The novelization further emphasizes this. According to "Hilda's Book of Beasts and Spirits", it is common for Forest Giants to become disgruntled if they are compared to their bigger ancestors. It is thus advisable to never make remarks about their size.Cite error: Invalid <ref> tag; invalid names, e.g. too many 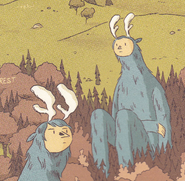 The Forest Giant, seen in the Wood Man's book.

Forest Giants among other species of giants. Left page; giant shaking hands with a Forest Giant.

The forest giant as seen in Hilda's nightmare 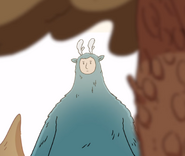 Hilda in the Forest Giant's lair 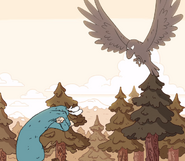 A forest giant in "Hilda and the Nowhere Space"