Hilda: A Netflix Original Series Wiki
Register
Don't have an account?
Sign In
Advertisement
in: A to Z, Characters, E,
and 4 more

Engilbjort Williams is a ghost who is first seen in Chapter 9: The Ghost. She is buried at St. Guglows Cemetary.

Like all ghosts, she is transparent, with her bones visible inside her body. She has a glowing skull.

She is shorter than her brother, but much bulkier in build. She is also quite strong.

It's unknown when Engilbjort was alive.

Ever since she was alive, Engilbjort had a severe sibling-rivalry with her brother Craigie, and this continued after both of them had died. Engilbjort resented him for the fact that their parents apparently favored him (though it's unknown if this is true or if she just perceived it that way), and left him an entire book collection.

When Craigie's favorite book, "The Legend of Great King Condon", went missing from Frida's house, and Hilda, Frida and David visited Craigie at St. Guglows Cemetary to look for it, Craigie immediately suspected Engilbjort. He roughly woke her up from her grave and the two got into a heated argument, till Hilda broke it up and Frida demanded her book back. Unwilling to give it up, Engilbjort challenged the three kids to a wrestling match.

Despite it being three against one, and Frida having a wrestling batch, Engilbjort was clearly too much for them to handle, especially since she used her ghost powers to cheat. The first time she was called out for this by the referee and audience, but the second time she used it much sneakier and defeated all three humans.

Unwilling to give up, Hilda lied down on Engilbjort's grave so her bones could not get back into the ground. Since the sun was comming up, Engilbjort had no choice but to give up the book. Sadly, the book she had taken was not "The Legend of Great King Condon" but "The Squire’s Folly".

Arguing with her brother. 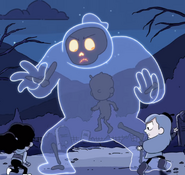 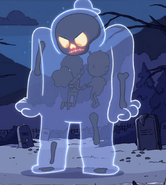 ...and Frida as well

Forced to return the stolen book.