Hilda: A Netflix Original Series Wiki
Register
Don't have an account?
Sign In
Advertisement
in: A to Z, Groups, E,
and 2 more

"Chapter 1: The Hidden People"
An elf is a small creature that lives in a village populated by other elves, which is usually situated in the middle of any area of land, away from other elvish villages. They appear in the graphic novels, animated series, and novelization, though their history, culture and lifestyle are shown in more detail in the latter two.

Elves have pointy ears. For most Elves, their skin complexion is of a pure white color, but some members have more reddish skins (like the Mayor and the King) or brown (like Adeline). They are shown to have head and facial hair, which, like humans, can be shaped into any style. While their limbs are very thin and stick-like, their torsos are of various shapes and sizes, from skinny to fat.

Their basic design is depicted as being very simple and devoid of any details, akin to a stick figure. This lack of detailing may be to better represent how small they really are, compared to humans and other creatures.

Elves wear a variety of clothing and armors, varying from village to village and from one hierarchical position to another.

Some Elves have beards or mustaches, but most are clean-shaven.Some of the only elves that keep beards are the lost clan.

Elves live in villages, usually situated in the middle of any land they chose to colonize and erect a village upon.

Elf houses look just like human houses in design. Like with humans, the higher ranking Elves live in bigger buildings. The king has a palace for example. Only the houses of the Bragga Family are different.

Villages, in turn, are part of counties. The only Elf Counties mentioned in the series so far are the Northern Counties.

Elves have been ruled by a king since the start of their civilization.

The king is supported by a government lead by a Prime Minister, who is elected democratically. It's not known how long a prime minister stays in the office before new elections are held.

Elf villages are governed by a mayor.

The entirety of the elvish civilization is built upon the utilization of contracts and other paperwork. Any decision or deal made within a village or even between villages, whether it is between members of the bourgeoisie or simple peasants, or with any other outside creature, is made by redacting and signing a large amount of various contracts. The more complex the paperwork, the better. They have protocols for almost everything.[1] The only known exception to this rule are the Elves of the Bragga Family.

In the time of the first Elves, contracts were even more important than today, to the point that presenting an incomplete contract to the king was reason enough to be exiled. While the rules have become less strict over time, paperwork remains an essential part of Elf culture.

The only known way to get out of a signed contract with an Elf is by having the contract destroyed by a Lindworm. Over time, many Elves have tried to fake their contracts getting destroyed by a Lindworm by actually burning it in the toaster, but these attempts are quickly seen through since Lindworm ashes have a blue glow that is difficult to replicate.[1]

In the animated series, the Elves have their own postal system called Email or Elf Mail, which covers the entire area from the wilderness to Trolberg. Email is a highly efficient system, that makes use of pneumatic tube transport, and couriers riding on rabbits, birds and squirrels to deliver any letter within a few hours after posting. The Elven Postal system is one of the most important institutions in the world of Elves.[1]

In "Chapter 11: The House in the Woods", Hilda used email to send a message to her mother in Trolberg to let her know she was currently lost in the wilderness. She only had to address the letter to "mum", without any street names or house numbers, and the Elves still managed to get it delivered to the correct house.

Interaction with other species

Elves prefer privacy. As such, they and their villages usually cannot be seen by any other creature. The mere visual knowledge of their existence by other species is based on paperwork: Elves, by default, cannot be seen or touched by any other creature, unless they sign the correct, lenghty paperwork, granting the creature the permanent ability to see Elves and their villages. This task is extra bothersome by the fact that the papers are often too small for any bigger creature to properly read and sign, sometimes requiring the aid of a magnifying glass or otherwise.

While they cannot be seen, they can still be heard and interacted with by those that have not signed the paperwork.

A creature to whom Elves are still invisible can not accidentally or purposely inflict any damage to elf buildings. Their bodies will simply phase through the structure without harming it (though elves still consider this rather unpleasant, even if it doesn't hurt them).

Characters that filled out the proper paperwork and can thus see Elves include:

An elf village as seen in the graphic novels 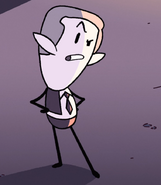 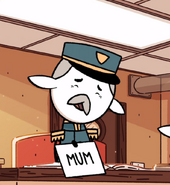 Elf Courier on a squirrel

The king in the time of the first Elves. 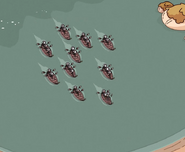