Hilda: A Netflix Original Series Wiki
Register
Don't have an account?
Sign In
Advertisement
in: A to Z, Characters, E,
and 5 more

The Mayor (real name unknown) is the mayor of the Elf Village surrounding the cabin where Hilda and Johanna lived in episodes 1 and 2.

Like many of the Elves in his village, he dislikes the humans due to them constantly stepping on the elves houses which, even though they can't touch them, still scares the elves. That the humans didn't even know about the elves since they couldn't see them doesn't interest him, he just wants to see them go.

In both the graphic novels and the animated series, he is first seen when Hilda came to visit him with Alfur to try and settle a truce between her and the elves, he brushed off all her attempts at negotiation, claiming the situation was beyond his control. Only when Hilda accidently took his beloved pet cat Angelina hostage (she crawled into Hilda's hair) did he tell her where to find the Prime Minister.

Talking with Hilda and Alfur 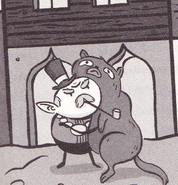 The mayor in Hilda and the Hidden People