Hilda: A Netflix Original Series Wiki
Register
Don't have an account?
Sign In
Advertisement
in: A to Z, Groups, D, Creatures
English

Graphic novels:
Hildafolk
Animated series:
"Chapter 1: The Hidden People"
A deer-fox (can also be written as "deer fox" or "deerfox") is a furry creature resembling, as the name suggests, a cross between a deer and a fox.

In the graphic novels, only a single specimen is ever seen; Hilda's pet deer-fox Twig. The animated series shows more deer-foxes in Season 2's "Chapter 9: The Deerfox", and most information regarding the species comes from that episode.

Deer-Foxes have the head, body, and tail of a fox, but with antlers and hooved feet like a deer. They have fluffy tails that are roughly as long as their bodies.[1]

Babies and cubs resemble a fox more than a deer, while adults resemble deer more than a fox. This is shown with how adult deer-foxes have long, deerlike legs, while cubs and babies have legs more like those of a fox.

Both male and female have antlers, though the antlers of the male are larger. Alpha-males have the largest antlers.

Deer-Foxes are extremely rare, to the point that most people believe them to be just the stuff of legends, and at least in the animated series there are no scientific books about them, just folktales. In the tie-in novel "Hilda and the White Woff", Hilda does mention she found a book about Deerfoxes in the library, and according to Hilda's Book of Beasts and Spirits, most information regarding Deer foxes is handed down through the ages in fairy tales and folklore.

Deer-Foxes live in herds. Most of the time, they reside in a different dimension called the land of starlight[1], that they can enter and leave with help of a path made of hard light. Occasionally, they leave this world to visit the woods around Trolberg for unknown reasons. According to "Hilda and the White Woff", they do this every spring in an event called the Great Deer Fox Migration. According to Hilda's book of Beasts and Spirits however, the migration happens every few years.

Deer-foxes can bark like dogs and howl like wolves. They are at least partly carnivorous, and expert foragers.[1]

Deer-foxes are more intelligent than either regular foxes or regular deer.[1]

It is unknown how long it takes a deer-fox to reach their full size, but it is estimated to be at least several years. In the animated series, Twig has clearly been living with Hilda for a few years already (the tie-in novel states Hilda and Twig first met five years ago), and he is still a cub; the only change he underwent in that time is that his antlers grew from two stumps to fully functional, though tiny, antlers. In the Graphic Novels, a year passes between "Hilda and the Bird Parade" and "Hilda and the Stone Forest" (the annual Bird Parade is held in both stories), yet Twig does not grow notably larger between these stories. The same is true for the epilogue of Hilda and the Mountain King, which is set a year after the rest of the movie, yet Twig looks still the same.

Deer-foxes can find themselves drawn to a kindred spirit, and become a fiercely loyal companion to that creature. Once a deerfox has chosen a companion, it will remain loyal to that companion of the rest of their lives.[1] Besides humans, they have also befriended Forest Giants and wood spirits.[1]

entrance to their home dimension

Deer-Foxes in their home dimension.

Twig's parents at the gate of their realm 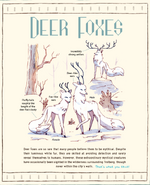