Hilda: A Netflix Original Series Wiki
Register
Don't have an account?
Sign In
Advertisement
in: A to Z, Groups, B,
and 4 more

Animated series
Chapter 7: The Lost Clan
The Bragga are a family of Elves that live in Trolberg's Gorrill Gardens. Among the Elves of the Northern Elven Counties, they are also known as The Lost Clan.

The Bragga are first seen in "Chapter 7: The Lost Clan", and also appear in the Hilda Tie-In Series.

Physically, they look like most other Elves, with one major difference; many members of the family have beards and/or moustaches, while usually Elves lack any facial hair.

They are also more aggressive than most other Elves, resorting to violence whenever they feel threatened or need to settle a conflict. Members of the Bragga are known to train in archery and hand to hand combat. They also ride rabbits or birds in battle. Like the Lindworm, they live by a code that state they never back away from a battle (unless it's a battle they clearly can't win, in which case a higher code states they shouldn't even start).

On a technological scale, they seem to be less advanced than other Elves. Their houses also are notably different from those seen in The Northern Counties.

What really sets them apart from other Elves however is their aversion towards paperwork.

The Bragga Family has been around since the early days of the Elves.

Many generations ago, they met with the Aldric Family to execute a real estate contract for a plot of land that the Aldric wished to buy from the Bragga. Considering how important paperwork is for Elves, the negotiations strongly resembled an epic battle. Eventually, an agreement was reached and the contract was signed. Sadly, the Bragga accidentally signed the contract only twice instead of in triplet, and the mistake was not discovered until the contract was already offered to the King. In those days, presenting an incomplete contract to the king was considered treason, and the Bragga were exiled on the spot. The land they had tried to sell became known as No Elf's Land, and remained unused.

The Bragga eventually settled in the human city of Trolberg, thus making them the first Elves to ever go there. It was for this reason no other Elves were ever able to find them. Here, they build a village in Trolberg City Park, near a crack in the wall surrounding the city. The whole incident with the contract led to them swearing off paperwork forever. Instead, they rely on an honer system where everybody keeps their word, or else settles a dispute by combat.

In "Chapter 7: The Lost Clan", Hilda, Frida and David discovered the lost clan when they were looking for a rare flower for their botany badge; the blue nettle. This flower was in the middle of the Bragga village. The Bragga immediately attacked the three humans and took David hostage, though they had no idea what to do with him afterwards since they never took a human hostage before. When Alfur also learned the lost clan was in Trolberg, he immediately sought them out with a new contract that could end their exile, as the rules in the northern counties had become much less strict over time. Unfortunately, their leader, Bartell, refused to sign anything due to the Bragga's aversion towards paperwork, and the fact that Alfur was a member of the Aldric family. Instead, they demanded that Alfur would settle the old conflict by combat.

Frida interfered and offered to find a solution that could benefit everybody. At her request, Alfur, Hilda and Frida sought out a Lindworm and had her destroy the contract; the only way to render any Elf contract void. Thus, the exile of the Bragga was ended. They had no desire to leave their current home in the Wall of Trolberg however, and their leader, Bartell, willingly gave Alfur the plot of land that the two families had been arguing over all those years ago.

They play a large role in Season 2. In "Chapter 6: The Old Bells of Trolberg", their live is disturbed by the hourly ringing of the bell in the tower next to their village, so they gladly help Hilda disable the new mechanical bellringers that Erik Ahlberg had installed in all the towers. In "Chapter 7: The Beast of Cauldron Island", Alfur summons them to Cauldron Island to fight the Lindworm (who refuses to leave her island, even though she knows Erik Ahlberg is comming for her, without a fight first). The battle ends in a tie when Cauldron Island is revealed to be a huge Kraken, forcing them to abandon it.

In "Chapter 9: The Deerfox", one of their pigeon couriers arrives at Hilda's house to report to Alfur that Twig has been seen leaving the city. In "Chapter 13: The Stone Forest", Alfur visits their village to borrow Cedric the pigeon.

The events from "Chapter 7: The Lost Clan" are adapted into "Hilda and the Great Parade". Their role in this novel is largely identical to that in the animated series. One minor difference is that in their backstory in the novel, they presented the incorrect contract to a queen instead of a king.

The events from "Chapter 6: The Old Bells of Trolberg" are adapted into "Hilda and the Time Worm". Like in the series, the Bragga ask for Hilda's help to stop the mechanical bellringers, and participate in the attack on the Central Belltower.

They are notably absent in "Hilda and the Ghost Ship", which adapts "Chapter 7: The Beast of Cauldron Island". 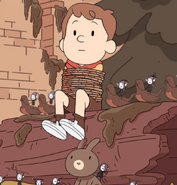 David taken hostage by the Bragga

The Bragga and their captives in "Hilda and the Great Parade"