Hilda: A Netflix Original Series Wiki
Register
Don't have an account?
Sign In
Advertisement
in: Festivals, A to Z, B

The Bird Parade is an annual festival celebrated in the city of Trolberg to honor The Great Raven.

The parade has been held every year for the past centuries. The animated series doesn't give an exact number, but in "Hilda and the Bird Parade" a newspaper article claims it's the 256th parade.

The tradition began when the Great Raven first visited the settlement of Trolberg and was mistaken for a messenger of the god worshipped by the locals. By honoring the Great Raven, the people of Trolberg believe the bird will bless them with another year of good luck.

The parade consists of a multiple decorated floats, people dressing in bird costumes, and fireworks. The Sparrow Scouts always participate with their own float.

The Great Raven visits the parade 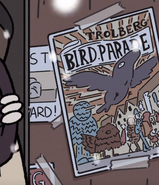 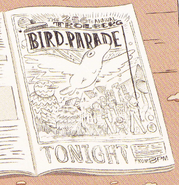 News paper about the Bird Parade

The Bird Parade in the graphic novels