Hilda: A Netflix Original Series Wiki
Register
Don't have an account?
Sign In
Advertisement
in: Creatures, A to Z

A Barghest is a creature that resembles a large, black dog. The only member of the species seen in the series so far is Jellybean.

As a puppy, they don't differ too much in size from regular dogs, but fully grown they can become as tall as a small building. Appearance-wise they look like a bigger version of regular dogs, except they can make their eyes glow with yellow light.

According to Alfur in "Chapter 13: The Black Hound", Barghest usually live deep in the mountains. Somehow however, a young Barghest got lost in Trolberg years ago, and was adopted by Tontu, who named him Jellybean. This Barghest would later stalk the streets of Trolberg, looking for his owner.

According to Hilda's research in "Hilda and the Black Hound", Barghest are rare, and it is believed that Trolls and Giants used to keep them as pets. According to "Hilda's Book of Beasts and Spirits", there are known cases of Trolls raising Barghets as aggressive guard dogs. These barghests tend to be the most dangerous, and have given the species a bad reputation, but a well raised barghest can be as friendly and loyal as any domesticated dog. 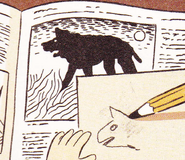 Book on Barghests, seen in "Hilda and the Black Hound" 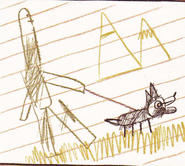 Hilda's interpretation of a giant with a pet barghest.