Hilda: A Netflix Original Series Wiki
Register
Don't have an account?
Sign In
Advertisement
in: A to Z, Characters, A,
and 4 more

Adeline is an elf that first appears in "Chapter 12: The Replacement". The character was created for the animated series and does not appear in the graphic novels.

Adeline is a female elf with a brown skin and black, curly hair. Like all Elves, she has black stick-like legs and arms. Adeline is dressed in a blue dress with a red sash, and wears a pointy hat.

Adeline is the keeper of notes for the Delegation for the Return of Wayward Elves. While she was still in the Northern Elven Counties, she became a huge fan of Alfur and his reports about his adventures in Trolberg.

In "Chapter 12: The Replacement", she is among the Delegation members that are send to Trolberg to pick up Alfur, who has been replaced by Alvin as the Northern Counties' correspondent in the city because the Elf Prime Minister and his cabinet believe Alfur's reports about his adventures in Trolberg to be false. To prevent Alfur from having to leave, Hilda comes up with a plan to trick the delegation. They ask the Bragga Family for help, and Agnes volunteers to disguise herself as Alfur. Adeline, who hasn't seen Alfur yet, falls for it, and immediately declares her adoration for his work. Agnes can't keep up the appearances for long however, and the real Alfur is forced to reveal himself to prevent the situation from escalating.

When Alfur tries to escape from the Delegation, Adeline joins the Delegation in an attempt to capture him. She does appologize to him however that they had to meet this way. The chase takes the Elves to the Farmers Market. There, the Elves are mistaken by the locals, who can't see them, for spirits, and are eventually captured by Gerda Gustav when they enter a lighthouse decoration. Alvin and Alfur are the only elves not captured since they jumped out of the lighthouse in time. Along with the other captured Elves, Adeline is brought to Safety Patrol HQ by Gerda, where she attempts to interrogate them. Adeline is the only one of the group who doesn't try to look for a way to escape, but instead keeps a detailed report of their adventure.

Alfur rescues the group by tricking Gerda into believing he is a member of the Spirit Safety Patrol, so she releases the captured "spirits" into his custody. Not much later, Alvin prevents Alfur from getting replaced by filling out an eyewitness confirmation form to clear Alfur's name. The Delegation thus departs without Alfur. Before they leave, Alfur asks Adeline to help him make a report of their visit, and both blush as Adeline agrees. 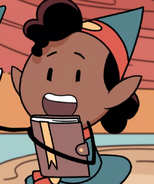 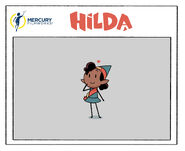 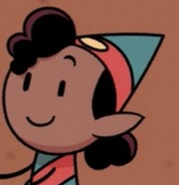